We have heard of countless instances where a WhatsApp forward has created a ruckus. For a change, we found one where someone took the baton to turns things around for Good. Sushma started a volunteer project for preventing sexual abuse as a result of a WhatsApp forward.

Sushma, a Kannadiga from North Karnataka, stumbled upon a similar Whatsapp forward of a 3-month-old baby being sexually abused. Disturbed, she got together with a group of people and began brainstorming on ways they could help. With an alarming increase in the number of child sexual abuse cases among in India and no time to waste. Sushma started a small volunteering project of her own that could minimize this vice of the society. She knew that people take advantage of the child’s innocence and lack of awareness. Hence, Sushma decided to start at the rural level.

Talking about being abused in any sort of way is not easy to come by. People are mistreated and find it difficult to find their voice and speak out about it. As much as it shouldn’t be, sexual abuse, especially among children, is very common. More so in the rural areas of India where children have not received any form of sex education. They are unaware of it and are scared to come forward because they are embarrassed and ashamed.

Get the first copy of our Positive Newspaper for free. Use code”SUSHMA’.

A large-scale national study conducted in 2007 by the Ministry of Women and Child Development (MoWCD), to assess the extent and nature of child abuse in India, uncovered some alarming statistics. Among the 12,447 children interviewed, more than half (53%) reported experience of sexual abuse, defined as “sexual assault, making the child fondle private parts, making the child exhibit private body parts and being photographed in the nude” and over 20% reported severe sexual abuse. Such horrendous incidents spam our lives – through newspapers, television, Facebook, and even on WhatsApp.

Sushma observed a potential opportunity to propagate the idea in the LEAD program by the Deshpande Foundation. It is an organization that seeks to support initiatives that can bring social impact. She built a volunteer project in the LEAD Campus App explaining the objective of her work and invited students in the nearby areas to volunteer with the cause. She received a good number of responses from students who were ready to be volunteers. The work began. Since then Sushma has juggled her academics and aspirations to make sure that girls in rural Karnataka are safer and empowered.

You may also like: A Sex worker’s son who changed the lives of 1000 Sex workers by raising a voice

Through this initiative, she educates children below 14 years of age to identify indications of assault. Sushma has been successful in conducting workshops and sessions in about 15 primary schools with more than 500 students. Wherein they teach young children about the difference between a good touch and a bad touch. They use simple visuals representations like that of a butterfly to explain how good touch and bad touch works. “If someone is trying to catch a butterfly by being forceful and rough, it is known as bad touch, whereas when someone simply touches the butterfly gently with no harmful intentions it is known as good touch. With these examples, we explain to children how people would tend to touch them around their private parts,” says Sushma.

Sushma and her team teach self-defense to adolescents and children, in schools and orphanages in rural Karnataka, to empower them to protect themselves and their peers. She also teaches young people, both boys, and girls about the consequences of their actions and how to respect and treat each other.

Her work even caught the attention of Ashoka Innovators for Public, a US-based Social-Entrepreneurship Organization that eventually inducted her into their Youth Venturer program. Pursuing her final year of BSA Agriculture, Sushma still finds time to teach students about sexual abuse and personal hygiene. Despite being slim with the team, her intent has only grown stronger. Sushma plans to continue this as a volunteer project irrespective of what she chooses as her professional career. “The sessions have transformed the lives of girls and has made them confident to object and inform authorities when a foul act happens. I am happy that I can make my place safe for girls,” quips Sushma. 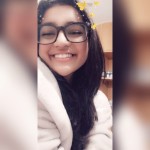 I am currently pursuing my Bachelors in English, Journalism and Psychology. I enjoy writing and spend most of my time drawing and painting random things. I am a dog lover and enjoy cuddling my dog who for some reason hates it.