35 million school-children in India are dyslexic. This means they have problems with reading, spelling, attention span or even speed of effective learning. These children could show brilliance in other parts of the intelligence spectrum, but due to their inability to cope with the modern education system, most of them end up with low grades. Recognizing the necessity for endeavours to help these children, four engineering students namely Tushar Gupta, Mudita Sisodia, Schezeen Fazulbhoy and Mitali Raju teamed up to create Augmenta11y, a free smartphone app which helps children with dyslexia read books in the real world using their phone’s camera.

To understand how helpful Augmenta11y can be, one must understand the benefits of the technology it uses, i.e., Augmented Reality (AR). In simple terms, it imposes a computer-generated image (CGI) on a person’s view, thereby providing them with an altered view. Sounds familiar? It is the same technology that famous gaming apps like Pokémon Go use. The Augmenta11y app user can essentially open the app and scan the piece of text that they wish to read. The text is recognized on the fly (without the need to take a picture of it) and processed. An appropriately styled piece of text is superimposed on top of it, with AR. The user can now read the text with less difficulty.

Use “AUGMENTA’ as code to grab your free print copy of The Optimist Citizen.

“Each case of dyslexia is different. This is why Augmenta11y allows its users to customize their preferences. This is one of the major characteristics which highlights it as a trailblazing opportunity for dyslexics.” says Tushar. In fact, it doesn’t include default styles for a first time user because not being able to read with those settings may discourage them from using the app. Instead, there is a designed onboarding sequence for them that would take them through the various settings available and tweak them to their preference.

These alterations are made with respect to the font (For example, Open Dyslexia is a font specifically designed for this purpose), size, letter spacing, line height, and the contrast ratio between the background and foreground of the text. A lot of people prefer yellow backgrounds with black text instead of white backgrounds with black text. Every user has different preferences in this and so we allow them to customise it for themselves.

You may also like to read:  IIM-B alumni develops an app to detect and control the spread of fake news.

The reason for moulding their research and findings into the end product of an app is to ensure quickness, availability and easy use. The innovation behind its working gives it the potential to help children with varying degrees of dyslexia. Learning disabilities and mental illnesses are a spectrum. Despite being so common, dyslexia is difficult to diagnose and lacks a complete cure. The aim of this app is to allow those suffering from it to perform their daily activities with relatively more ease.

India is a nation that boasts of multilingualism. The variety of languages may cause 10-15% of the population to suffer from some type of dyslexia, according to the Dyslexia Association of India. The team first tested the app with 14 students from ages 12-14 and recorded a 21.2% decrease in the reading time observed. 93.3% of them preferred to change the background to foreground contrast. Since then, Augmenta11y has been effectively used 86 regions across 29 countries with more than 32,242 blocks of events scanned so far. The team wishes to take the app forward by looking into how it affects different Indian languages and how that problem can be combated. They are also on the lookout for NGOs where they can test the app and plan to keep the keep absolutely free and without ads forever.

This undertaking contributes to the flicker of hope in humanity’s quest for inclusion and goodness. It urges young people like them to keep giving back to our society and take small steps that are required to make a truly big change. 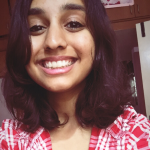 Nayana is currently pursuing Bachelors in English, Journalism and Psychology. She is shy but loves having meaningful conversations. She tries to read more often than she watches screens.

This couple lost their 1 year old daughter to a rare disease. What they did next will melt your heart!