A country which has an equally diverse set of palettes as the number of cultures and religions embedded in it, the love of Indians towards food is evident. Maybe it is the simple Dal and roti cooked by your mother or a complex Italian dish at an up class restaurant, our affection for food is infallible. It was the same affection that was instilled in Narayanan Krishnan right from his childhood who pursued a Hotel Management course from Madurai Kamaraj University and was working as a chef at a five star hotel. His dream of cooking world class cuisine was coming true and he was even supposed to go to Europe as a chef. But what he witnessed next would go on to change his life forever. While visiting his home town of Mysore he saw an old man who was crumbling to the core due to hunger eating his own faeces to survive. Narayan was shocked. His ideologies were shattered and his notion of food was completely changed forever.

For the moment he purchased some Idlis for the old man. But the incident coerced him to think, what he could do for the millions who are homeless and leading a miserable existence due to the lack of food. He started doing what he did best, preparing hot cooked meals- but this time for the hungry and destitute on the road. Initially it was just a one man army, but with time other joined and in 2002 he founded the Akshaya Trust.  . Akshaya Trust rescues the elderly and mentally ill road side destitute who are left uncared for in Madurai. They have their own ambulance in which these abandoned people are brought to the Akshaya Home Campus where they are attended to. It is a home to around 400 people now. Apart from the free cooked meals, they are provided health care and other related facilities. However what sets Akshaya Home apart is the special care and immense love given to the destitutes. It is for this reason that the group of volunteers who take care of the Home clean, shave and feed them with their own hands. The trust has served about 2.25 million meals from 2003 to 2016. They have been providing three meals a day, every day, sunshine or rain, for more than 10 years now. They have rescued about 1500 people who were ill or old and have also reunited more than 400 people back to their families after rehabilitation and counselling.

When asked about the happiest moment in this journey, Narayanan says it was when they inaugurated the first Akshaya home spread over a sprawling 70000 sq. ft. They now have all the more cause for celebration as by mid-2016 the trust is planning to operationalize the phase II of Akshaya home which can house another 350 people. For his efforts, Narayanan was named among the top 10 of CNN heroes’ 2010 list. He was also the inspiration behind the Malyalam movie “Ustad Hotel”.

What once started with just one man is now serving thousands. Akshaya trust is changing lives every moment. And its founder Narayanan Krishnan is now not only the namesake of an Indian God but for people who have been touched by the Akshaya trust he is indeed one. 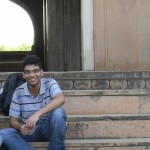