How often have we wondered if the people with visual impairment could actually perceive the images we see. Well, the good news is that there is now a solution. Comprising of a portable stand, a tactile book and a mobile app – a ready to use solution is now available in the Indian markets. Ankita Gulati, an IIT-Delhi Alumni has created a low-cost device, TouchVision which is a multi-sensory education platform for making pictures and diagrams accessible for visually impaired children. It is a patent filed mechanism that facilitates audio-tactile interaction in a simultaneous manner for a child and is completely user-friendly powered by a mobile app and available for the Indian audience. The App uses Finger recognition method, along with simultaneous audio and gesture inputs to make holistic education for vision deprived possible. The innovation has already impacted hundreds of students in the age group of 5 to 10 years.

Ankita, the 3M-CII Young Innovators Challenge Awards winner, started working on it during her masters at IIT-Delhi under her mentor Prof. M. Balakrishnan who advised her to visit various special needs orphanages and organisations for research purposes. Ankita recalls, “One of the schools I visited used handmade diagrams and maps that involved pulses to trace various states of India. A single map was rotated among the whole class and the students could not comprehend anything. Also, the handmade maps were not reusable and unavailable in bulk.” After the initial research work for about 6 months, she started working on her dream to solve a real-world problem and soon the team received a grant of 3 crores by the Ministry of Human Resource and Development (MHRD) to bring the concept to reality.

You might  also like: How an IIT- Graduate connected like-minded neighbours for social change via his App

It took their team three years for the project to be completed after its start in 2015. The hard work proved to be fruitful as the project got nominated for the Design and Innovation award and their project has now been incubated into a start-up. During her journey, she interacted with a lot of special needs educators and explained to them the plight of students at special schools who used handmade tools to comprehend things. “These things somehow limit the potential of such students and consequently their employment opportunities are limited.” reckons Ankita. Their team interacted with around 10 blind schools with over 50,000 students to gain a vision to understand the patterns and thought the process of visually-impaired students.

Even after the development of the product -“TouchVision”, it was a challenge to introduce their device to the public. “Even adults hesitated to use it, let alone children. If there are 100 special schools in Delhi, only 5 out of those used handmade tactile diagrams and hardly 2-3 schools had special educators.”, explains Ankita. The trials and testing of their product met with various challenges, but the team eventually came up with a prototype which included dedicated speakers, camera and books which costed around Rs. 15,000. However, after repeated iterations and alteration, the team finally launched the product with – three kinds of tactile books, a portable stand and a mobile application for interaction with the tactile diagrams. TouchVision is currently available in the Indian market at a price of Rs. 3000 and is been used in many schools pan India. 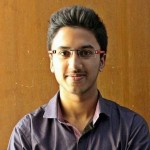